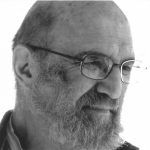 To say that “they threw away the mold” when Harry passed away misses the point entirely. He left it here for the rest of us. It is true however, that there will never be another Harry Sellers. Born in Rock Springs, Wyoming, wild, fun-loving, and irreverent to the last, he knew more about every corner of the Swell than anyone I’d ever met, not to mention the deserts of Nevada and California. GPS? Harry was never lost, and the places he told us about and how he described them … let’s just say that Edward Abbey, Wallace Stegner, even Hemingway would have seen him as a kindred soul. A giant personality, and yet as a painter, he won awards for his miniatures. Resourceful and independent, Harry was the last of the real pioneers, and I’m grateful to have known him, as much as one can ever know a man like him. Keep whooping it up, Harry, wherever you are.